Data Magna de Pernambuco (Pernambucan Revolution). This day was introduced in 2007. See below for more details.

1916 Ocean liner Príncipe de Astúrias sank near the coast of Ilhabela (São Paulo) The ocean liner carried almost six hundred registered passengers, and probably more than eight hundred illegal passengers, who tried to escape the great war in Europe. More than 475 people died. In 1989, parts of the vessel were blown up. The freight – including statues for a monument in Buenos Aires – were retrieved. 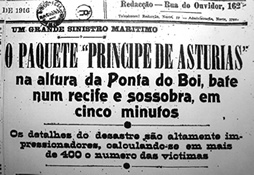 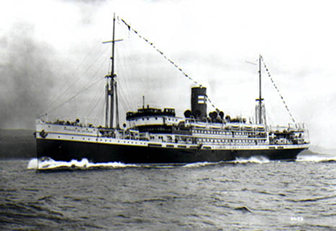 Start of the Revolt in Pernambuco. The settlement of the Portuguese royal family (since  1808 in Brazil) hadn’t received approval from all Brazilians. Especially the Northeast (including Pernambuco) was suffering economical malaise. The Great Drought of 1816 had destroyed large part of the harvests. The aversion against the  Portuguese grew, as well as the patriotism of Pernambucans. For example, during Catholic masses, wine was replaced by locally brewed aguardente, the host was no longer made of wheat flour, but of manioc flour. The revolution expanded to neighboring states, but was suppressed by the Portuguese army, in cooperation with Portuguese merchants and landowners. The leaders of the revolution were arrested and condemned to death. But it was king Dom João VI pardoned them. source
Flag of the Pernambucan Revolt. The three stars represent the states of Pernambuco, Paraíba, and Rio Grande do Norte. The actual flag of Pernambuco has maintained one star.

1838 Vila (village) São João del-Rei gained the status of a city. This historical city in the state of Minas Gerais (nearby Tiradentes) attracts many tourists.

Premiere of the movie “A Voz do Carnaval“. Legendary actress Carmem Miranda made her starring debut in this movie.

Death of Mário Covas Júnior (1930-2001), former governor of São Paulo. Mário died because of the consequences of bladder cancer. Covas, engineer, entered the local politics. He was opposed against the military dictatorship; as a result, he lost his political rights. In 1989, Covas was presidential candidate, and ended fourth. In 1994, Covas became governor of the state of São Paulo. The almost bankrupt state underwent drastic reforms: many state companies and public services were privatized during his mandate.

View all posts by admin →